The Business of Ed-Tech

Last year when I wrote about the top 10 trends in ed-tech, I saved “The Business of Ed-Tech” for the penultimate post. I’m starting my series there this time around. There’ll be plenty of opportunity throughout these year-end posts of mine to discuss the ways in which technology has shaped teaching and learning in 2012. But I want to recognize from the outset much of what we’ve seen this year is how technology will shape the business of education.

The (Story of the) Business of Ed-Tech


It's been a major story this year: broken educational institutions under seige by Silicon Valley.

Last year I noted the uptick in journalistic coverage of ed-tech (most notably with the launch of Edsurge), and the topic appeared in the media with increasing regularity in 2012. Much of this focused on the most notable ed-tech trends: iPads, Khan Academy, social media  (the good and the bad), online learning, and MOOCs. The “age old” dilemma of whether kids still need to learn cursive. The usual.

Increasing interest in ed-tech was particularly evident in the trade press. The long-running publication Education Week launched a new blog, Marketplace K–12, for example, to focus on “business trends and emerging models in education.” Investor Tom Vander Ark also began blogging there with a regular column on “Innovation.” For its part, the ed-tech blog upstart Edsurge raised $400,000 in funding from the Washington Post Company and New Schools Venture Fund.

And even the general tech press chimed in. Here are some of the ed-tech headlines drawn from just the last two months on the tech blog Techcrunch:

It’s not surprising. All the factors were in place for it: lower business startup costs (thanks to open source and cloud computing), the ubiquity of mobile devices among students and teachers, the rising costs of traditional education, the consumerization of technology, the consumerization of education technology, the impending Common Core State Standards and online assessments, an exuberance for early stage investing in technology startups, the super-coolness of geek-ery, the super-important-ness of social good.

Education entrepreneurs — and there were a lot of them this year — came from universities (Stanford professors Andrew Ng and Daphne Koller, for example, who launched Coursera early this year), from corporations (both Sebastian Thrun and Craig Silverstein left Google — the former for his startup Udacity and the latter for Khan Academy), and from K–12 schools (the lesson marketplace TeachersPayTeachers.com says its users earned some $14 million on its platform this year; and many educators opted to launch their own startups — Adam Bellow’s eduClipper and Jeff Scheuer’s NoRedInk to name just two). The ed-tech incubator Imagine K12 graduated two cohorts of education startups this year (one in May and one in October).


And lots of venture capital investment.

In July, investment firm GSV Advisors published the “Fall of the Wall: Capital Flows to Education Innovation” (PDF) where it heralded “great energy and enthusiasm around the PreK–12, Post Secondary and Adult (‘PreK to Gray’) education markets as they relate to innovation and the opportunity to invest in emerging companies at all stages.” 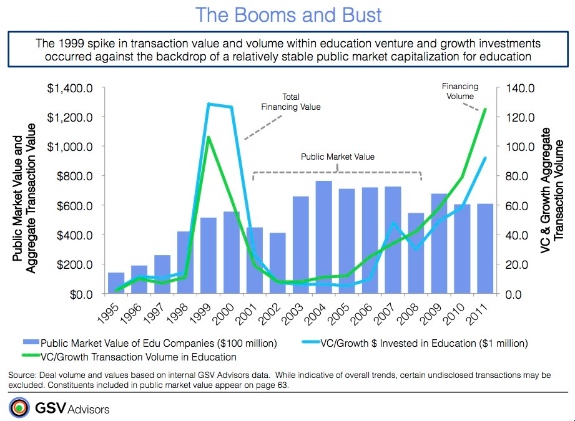 In November, the investment analysis firm CB Insights reported that education technology companies had raked in some $1.37 billion in venture capital over the past year.

Since 2010, CB Insights data shows an average of 53 venture capital financings per quarter to education focused startups Deal activity peaked in the first half of 2011, with 80 deals in the first quarter and 85 in the second but with recent notable financings such as Udacity’s $15 million from Andreessen Horowitz, sentiment to the space clearly remains high. Funding per quarter has also been significant with ed tech startups pulling down an average of $294 million per quarter over the Q2’11 to Q2’12 period.

To repeat: 80 education startups funded in the first quarter of 2012, and another 85 in the second.

Meanwhile, as education consultant Tony Bates observes, public funding for education shrinks. Due to funding cutes, for example, some 470,000 students were waitlisted from California’s community colleges this year.


The narrative of a "higher education bubble" had already taken hold, particularly in Silicon Valley, last year. The high cost of tuition -- in terms of time and debt -- just aren't worth it any more, so the story goes. Perhaps "too big to fail," perhaps not -- higher education institutions and the services they provide may begin to be "unbundled" as their business models can no longer compete with free and cheaper Internet delivery.

In its “Fall of the Wall” report, GSV Advisors estimates that more than 75% of the 106 companies that were funded in 1999 failed to achieve “adequate investment returns or failed entirely.” Not shocking, then, that investors have been reluctant to (re) invest in the education industry.

But investors are back full force, prompting many to ask this year if we’re (already) witnessing a bubble in ed-tech like we saw back in the 1990s. In other words, are education technology startups overhyped and overvalued? At what cost will there come a return on investment? (At what cost do we even focus on such questions?)

“while there is a burning unmet need and opportunity to apply technology intelligently to teaching and learning, too much overhyped edtech developed for reasons having little to do with enhancing education can collapse into a black hole of failure. And that’s a gravity well that could suck across its event horizon not just bad products, greedy investors and clueless entrepreneurs, but also the good of each group — with teachers and students dragged into the maelstrom.”

The Politics of the Business of Ed-Tech


But dragged into the maelstrom we all will be. After all, as famed tech investor Marc Andreessen has argued, “software is eating the world.” Software — and the Internet — are eating education. The other ed-tech trends I'll cover in the coming weeks will highlight that.

The politics of the business of education — ALEC, lobbying, virtual charters, Race to the Top, Election 2012, Common Core State Standards and brand new technologies everyone’s going to have to buy to keep up, to stay "compliant" — I’ll save that too for another post…