I attend a lot of education events — ed-tech conferences, unconferences, camps, workshops, meetups, meetings. But my favorite by a long shot has always been Maker Faire. You can mark your calendars now for the 2013 flagship events (May 18–19 in San Mateo and September 21–22 in New York). And/or look for one of the Mini Maker Faires near you.

Maker Faire, an event created by MAKE Magazine (Disclosure: I have freelanced for MAKE’s parent company O’Reilly Media), is a little bit science fair, a little bit hobbyist and hacker expo, and a whole lot of celebration of the DIY and “Maker” culture. (There were plenty of other science fairs this year — including ones at the White House and at Google — but Maker Faire is fairly unique, I’d argue, in its culture, creativity, and community.)

Why Maker Faire? Why make? In his talk at Maker Faire this spring, Mythbusters' Adam Savage explains:


Now in its seventh year, the Maker Faire is hardly new, but there is an ever-increasing interest (or perhaps more accurately a renewed interest) in the types of making, building, creating, and hacking that Maker Faire — as well as the larger Maker Movement — showcases and supports.

That interest is spurred in part by a proliteration of open source and entry level hardware projects: 3D printers like Makerbot (which unveiled its Replicator 2 in September), Arduino microcontrollers, the Raspberry Pi (one of my favorite education startups of 2011, which finally shipped its $35 computer board this year), e-textiles, robotics, laser-cutters, as well as a programming tools galore. (More on the importance of coding literacies in 2012 in a subsequent post in this series).

The Maker Movement also reflects the technological, political, and economic zeitgeist: the need for a technologically skilled work force, hope for a revival of American manufacturing, concern about STEM education all the while cutting many of the programs in schools that foster these skills — arts, wood shop, metal shop, computer science — to make more room for more standardized testing. 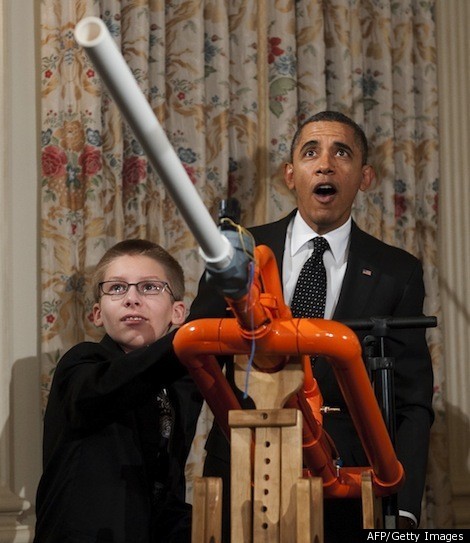 In addition to Maker Faires and science fairs where makers showcased what they’d, um, made, 2012 saw an explosion in the number of hackathons, where makers, hackers, businesses, and community members come together to build projects together, often in day- or weekend-long events. (My boyfriend Kin Lane has been tracking on these types of events and noted in October a huge spike in the number of university-focused hackathons.)

A Place to Play and Build and Learn


But events like these come and go. To create a more permanent place for these sorts of learning and building opportunities, many communities (in libraries, on college campuses, and in TechShops, for example), built “makerspaces” where people can access the tools and equipment, as well as the training to use them.

But “training” doesn’t feel like the right word to describe what happens in a makerspace. It feels too mechanistic, too instrumentalized. So much of the focus of a makerspace is about play and creativity and exploration.

That type of learning that is all too often missing from classrooms today, something that Gary Stager and Steve Hargadon (in an interview conducted at this spring’s Bay Area Maker Faire) discuss in the video below. We need more learning by making, through projects and inquiry and hands-on experimentation. Not learning by clicking, or learning by worksheet.

Makerspaces bring people together, out of the garage or the basement, out into the community into the public to share their skills and knowledge. However, much of this continues to happen outside the traditional school setting.

1) Self-directed learning (building your own project as a better motivator to engage in engineering).

2) Lower the cost of building and realizing dream projects through lower cost tools (software and hardware.)

Why has the field of study in these makerspaces narrowed only to STEM topics? What happened to the transdisiplinary focus of hacker/maker communities that make them so innovative? Where are the arts? Where are wearables, knitivism, DIY molecular gastronomy? Why do the challenges involve working on unmanned air vehicles or robots, projects that are of interest to DARPA for their military applications? Shouldn’t we encourage STEAM rather than STEM? Could it be that regardless of their educational potential, these topics have no possible military application? With such a narrow focus, one could ask which culture will win the day, maker or military?

There are other cultures that might clash here too, as many “maker” startups were founded this year (including one of my favorite startups of 2012, DIY), with several raising venture capital (including another one of my favorite startups from 2011, littleBits). What will the future hold for sustainable “maker” businesses, particularly those based on open source technologies — a question raised when it seemed unclear if the popular open-source 3D printer MakerBot would remain open source.

It’s not surprising then that instead of looking for investment and grants from the Department of Defense or from Sand Hill Road, many makers turned to crowdfunding to help support their projects. Roominate, a dollhouse with working circuitry. The invention kit Makey Makey. Digital storytelling community DS106. Just a few of the great maker projects that were successfully funded on Kickstarter this year, a site that has helped spur the growth in the Maker Movement by providing an "alternative" funding source for many creative projects.


But perhaps the greatest maker project of all in 2012 wasn’t built from wires or computer chips or 3D printed plastic. It was assembled from cardboard by a 9-year-old boy in his father’s auto-parts store in Los Angeles.

When the video of Caine’s Arcade was released in April, it quickly went viral. It remains one of the best testaments to the great power of making, building, playing, and creating. There is joy here, joy in sharing, and joy in community. There is joy in learning. We need more of that in ed-tech. More making. More learning. More joy.